Miles Macadam has recently completed a drainage and resurfacing scheme at Scania’s service depot in Newcastle, on behalf of Grattan Developments.

Scania is one of the world’s leading manufacturers of heavy trucks and buses. The yard at its Newcastle depot is subject to constant HGV use with tight turning radiuses and heavy point loading. Prior to the works, there was extensive cracking and spalling across much of the existing asphalt on site and many of the concrete sections to the rear of the yard had failed and considerable slab displacement was evident.

Following a drainage survey, necessary repairs were carried out to the existing drainage system using a ‘no dig’ CIPP (Cure In Place Patch repair system). This enabled yard activities to continue as normal. 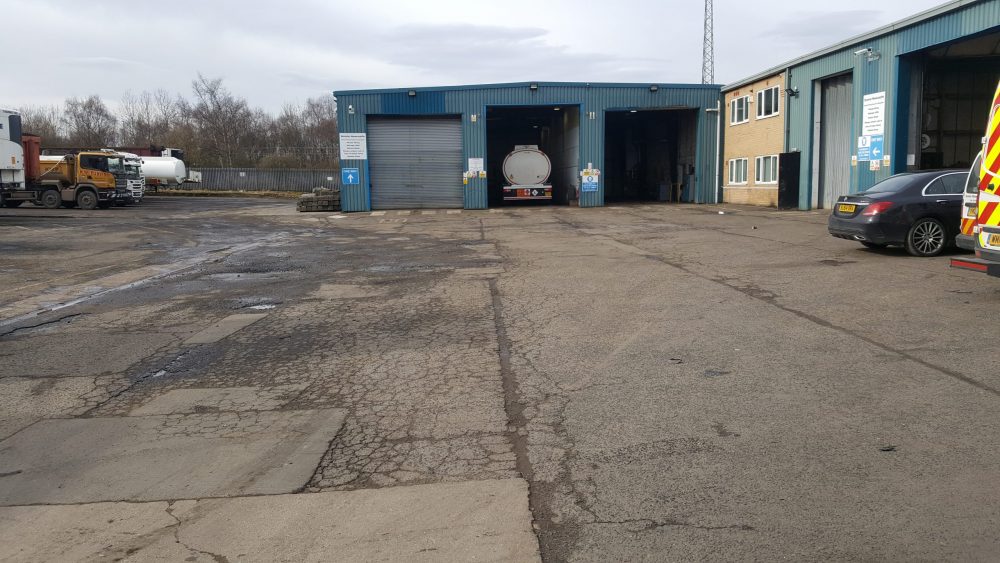 On completion of the drainage repairs, Miles Macadam removed areas of defective concrete and reinstated a 160mm base and binder surface course, in lieu of concrete, prior to laying 40mm of Hardipave

, Miles Macadam’s own BBA/HAPAS certificated Grouted Macadam. Other areas including the entrance and workshop were planed off then resurfaced with 40mm of Hardipave

Often described as a hybrid between asphalt and concrete, Hardipave

installation creates an incredibly hard-wearing, jointless and impervious surface course, thereby preventing the damaging effects of water ingress. It is also a fuel resistant material with a high tolerance to deformation, heat and abrasion. These performance characteristics make Hardipave

enabled a rapid installation process and project completion. This helped the site to maintain normal operations and minimise disruption.

was the ideal choice for this project. Scania’s service depots are extremely busy sites and take a lot of hammer. A typical concrete design specification would not have been deliverable without huge disruption to site operations. Hardipave

has similar wear properties to concrete but has the advantage of rapid installation and cure times, allowing the site to stay fully functional whilst work was carried out.”

has been used extensively throughout the UK on transport infrastructure hubs, industrial facilities and other areas of intense traffic loading. Notable examples include the Crossrail bus depot at Paddington Bus Station, Airbus Manufacturing sites and Wembley Coach Park (the only multi-storey coach park in Europe).