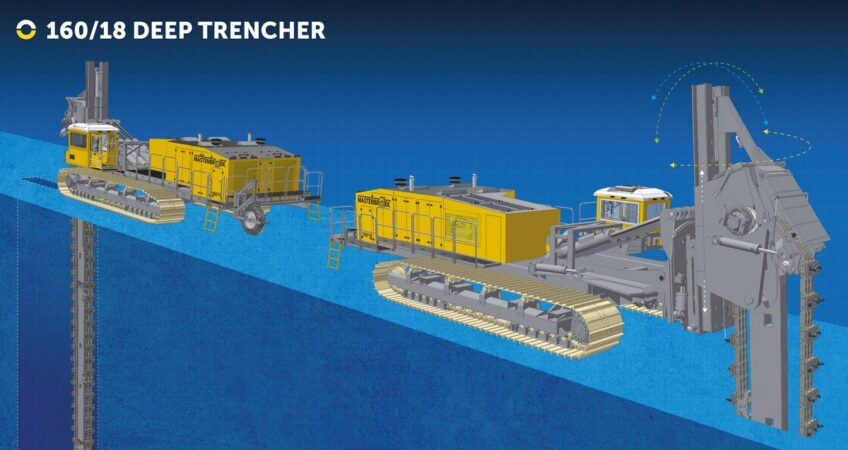 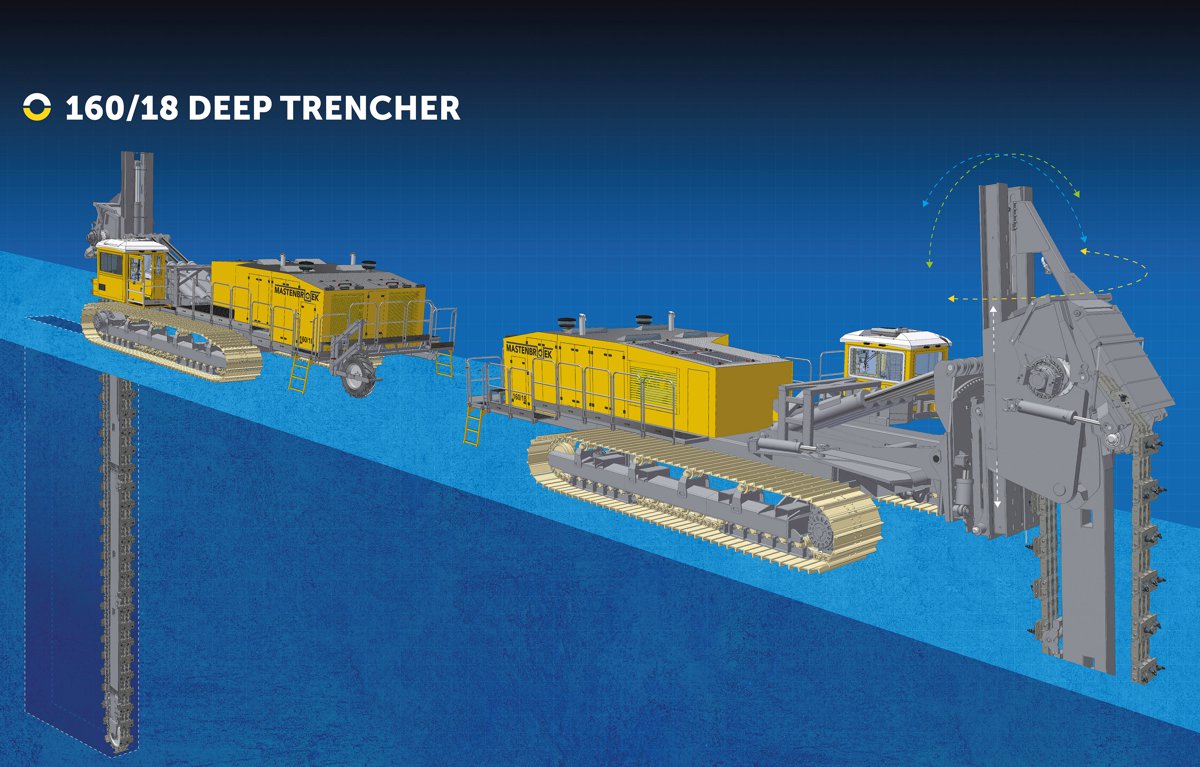 Mastenbroek showcasing their largest ever Trencher at bauma 2022

Mastenbroek, the UK designer and manufacturer of self-propelled trenchers, will reveal details of its largest ever machine at this year’s bauma.

Measuring 33 metres in length and weighing over 100 tonnes, Mastenbroek’s new 1600hp 160/18 trencher is twice the size and weight of the company’s previous largest machine (the 70/80).

Designed to suit the needs of a wide range of projects, from constructing cut-off walls controlling ground water movement and pollution containment, to improving compressible soils beneath loaded areas such as storage areas or road and railway embankments, the 160/18 is capable of soil mixing to a depth of 18m and dewatering to nine metres.

In order to operate effectively at such depths, Mastenbroek has overcome several engineering challenges. Deep trenching requires a consistent and powerful cutting technique, which can only be delivered by extremely large machines. Developing a machine, the size and weight of the 160/18 led Mastenbroek to create a modular design. The 160/18 is, in fact, three units coupled together and can be built or separated on-site using forklifts alone. As no one unit is wider than 3.6 metres or heavier than 45 tonnes, the 160/18 can be transported without special permits.

The 160/18 is the first Mastenbroek trencher to be powered by dual engines – two16 litre, EU stage five compliant, Volvo Penta TWD1683VE. The dual engine design delivers the required power and allows routine maintenance and servicing without needing specialist parts. However, Mastenbroek had to develop a new control system software to run them in unison.

A further design innovation is found in the 160/18’s new duplex cutting chain, which offers maximum digging force with minimal turning resistance and both high and low-speed ranges, allowing cement or bentonite to be delivered effectively. Measuring 18 meters in length, the 160/18’s digging boom is twice the length of the boom on Mastenbroek’s 70/80.

“The 160/18 is a monster of a machine and dwarfs our previous largest machine, the 70/80,” says Mastenbroek’s commercial director Christopher Pett. “This new machine is radically different to anything we have made before, and it needs to be to soil mix at depths of 18 metres and dewater nine meters down. As the 160/18 will be used in Europe, Australia and North America, it must be easily transportable. The modular design allows us to export the machine and enables the user to move it from project to project in the same way they would transport a trencher half the size.

“Our engineers have overcome considerable challenges in designing the 160/18, from the modular build, a new duplex cutting chain, the use of two engines through to the electrohydraulic system and controls. We believe the 160/18 is unlike anything else on the market and will make a big difference to contractors undertaking environmental projects around the world.

“The 160/18 is unlike anything Mastenbroek has designed before, and we expect a lot of interest from people visiting bauma in October.”

While Mastenbroek’s new 160/18 will dominate attention at bauma, the company will also be promoting its new CT12 Crawler Truck and its wider range of trenchers, which are deployed around the world to assist with agricultural drainage, dewatering, soil mixing and the laying of utility pipes and cables in a wide range of sectors, including renewables.

Mastenbroek manufactured its first trencher in 1977. Since then, the company has grown into a globally respected name in trenching, machine automation through its partnership with Trimble®, subsea cutting technology, ground stabilisation and groundwater control.

For more information about Mastenbroek, the 160/18 and the broader range of trenchers and crawler trucks, head to booth B5.219 at bauma – 24 – 30 October, in Munich.

The post Mastenbroek showcasing their largest ever Trencher at bauma 2022 appeared first on Highways Today.