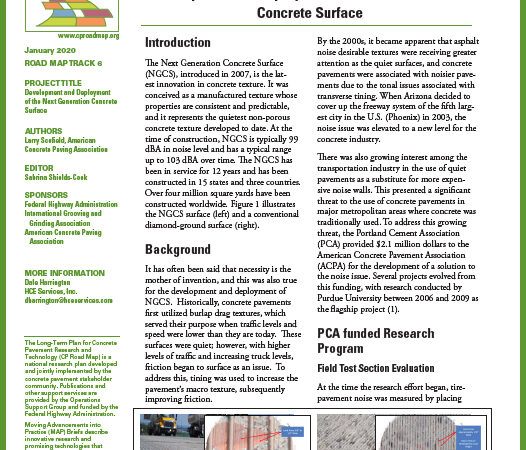 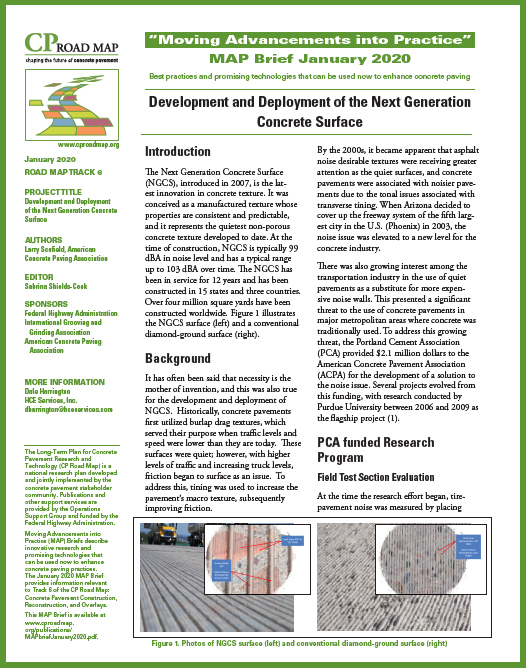 The latest MAP Brief* from the Concrete Pavement Road Map chronicles the research, development and implementation of the Next Generation Concrete Surface (NGCS), which was formally introduced in 2007.  NGCS surfaces represent the quietest non-porous concrete pavement textures developed to date, according to the MAP Brief, which notes that at the time of construction, NGC is typically 99 dBA and has a typical range of up to 103 dBA over time.

In the mid-2000’s, the concrete pavement industry was challenged to address the issue of noisy pavements. ACPA led the charge to develop a technology solution, and with a significant investment by ACPA, the Portland Cement Association and the International Grooving & Grinding Association (IGGA), an extensive research and testing program was undertaken to develop a quiet, safe and durable concrete surface texture.

The outcome of this effort was the developments of the Next Generation Concrete Surface (NGCS), which resulted from collaborative research efforts led by ACPA.  The initiative included research and development supported by the IGGA/ACPA Concrete Pavement Preservation Partnership (CP3), Purdue University, along with testing and implementation support from industry, agencies/owners, Chapter/States, and others interested parties.

________________________________
* Moving Advancements into Practice (MAP) Briefs describe innovative research and promising technologies that can be used now to enhance concrete paving practices. The Long-Term Plan for Concrete Pavement Research and Technology (CP Road Map) is a national research plan developed and jointly implemented by the concrete pavement stakeholder community. Publications and other support services are provided by the Operations Support Group and funded by the Federal Highway Administration.