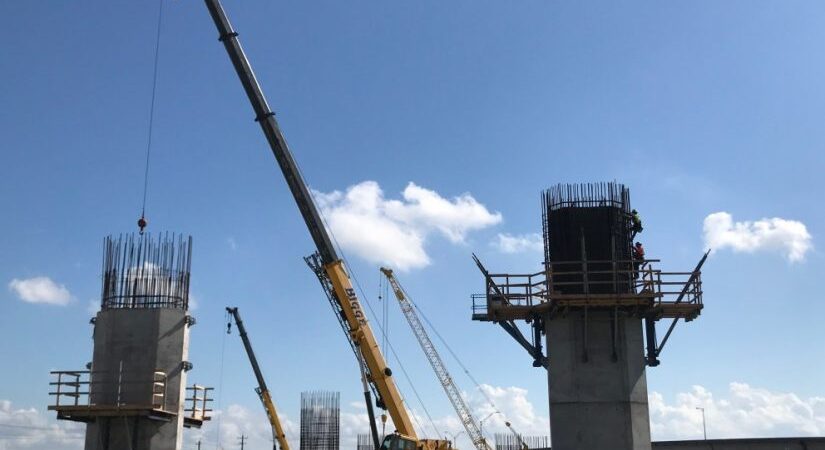 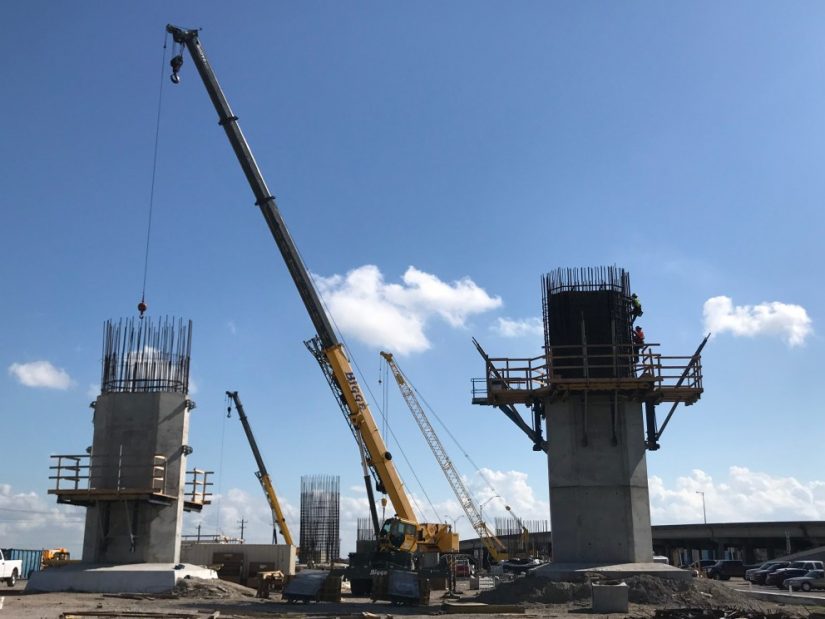 The $802.9 million U.S. 181 Harbor Bridge replacement project in Corpus Christi will result in the longest cable-stayed bridge in the United States, according to TxDOT. Photo credit: TxDOT

The engineering firm blamed for the fatal collapse of a pedestrian bridge at Florida International University in Miami has been removed from an $802.9 million bridge replacement project in Texas and its work is being reviewed on another, $962 million bridge project in the state.

The Texas Department of Transportation has called for the removal of FIGG Bridge Engineers on the U.S. 181 Harbor Bridge Replacement Project in Corpus Christi. The TxDOT cited the findings of a National Transportation Safety Board investigation of the 2018 Miami bridge collapse in its decision.

“The findings regarding FIGG are significant enough for TxDOT to request a replacement design firm for the New Harbor Bridge main spans,” says a TxDOT statement.

The announcement follows the agency’s suspension of FIGG on the project after the NTSB’s report was released in October. The report cited load and capacity calculation errors by FIGG for the Miami bridge’s design. It also said efforts by FIGG to address large cracking in the bridge led to the collapse that killed six people and injured others. 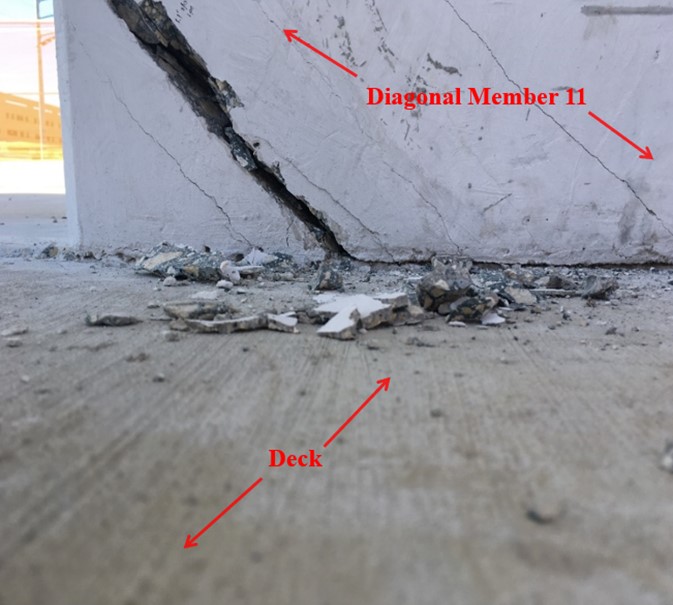 One of the cracks on truss member 11 of the Florida International University pedestrian bridge in Miami shown two days before the March 15, 2018, collapse in a photo by contractor Munilla Construction Management, and provided by the NTSB.

The NTSB report also stated that the Florida Department of Transportation, Florida International University, contractor Munilla Construction Management (which has changed its name to Magnum Construction Management), and Bolton Perez & Associates Consulting Engineers failed in their oversight duties by not closing the road beneath the bridge or conducting proper peer review.

FIGG has denied it was at fault for the collapse, saying it was caused by construction flaws not the design. The firm released this statement:

“FIGG was shocked by Texas Department of Transportation’s press release concerning FIGG’s design role on the cable-stayed main span and relating this to the construction accident on a pedestrian bridge in Miami.”

WJE said in a statement the collapse would not have occurred if the construction joint between the northernmost diagonal and deck on the Miami bridge had been roughened as required by the project’s specifications. It said the shear-friction resistance of the unroughened joint was less than the shear force at the time of the collapse. “As such, in our investigative report, WJE concluded that the collapse was due to a construction error.”

The NTSB, however, rejected construction flaws as a cause. It said FIGG overestimated the capacity of truss member 11 and underestimated the load by choosing the wrong load factor. Though FIGG did not know the cause of the cracking, it decided to retension post-tension bars for truss member 11. It had also assured stakeholders in the bridge project that the bridge was safe, just hours before its collapse.

Prior to the NTSB report, FIGG settled lawsuits with the victims and the deceased’s families for an undisclosed amount. Other companies involved in the bridge’s collapse have also settled. The contractor, Magnum Construction Management, formerly known as Munilla Construction Management, recently reached a $103 million settlement through bankruptcy court to be shared among the victims and families of the deceased.

Another FIGG bridge under review 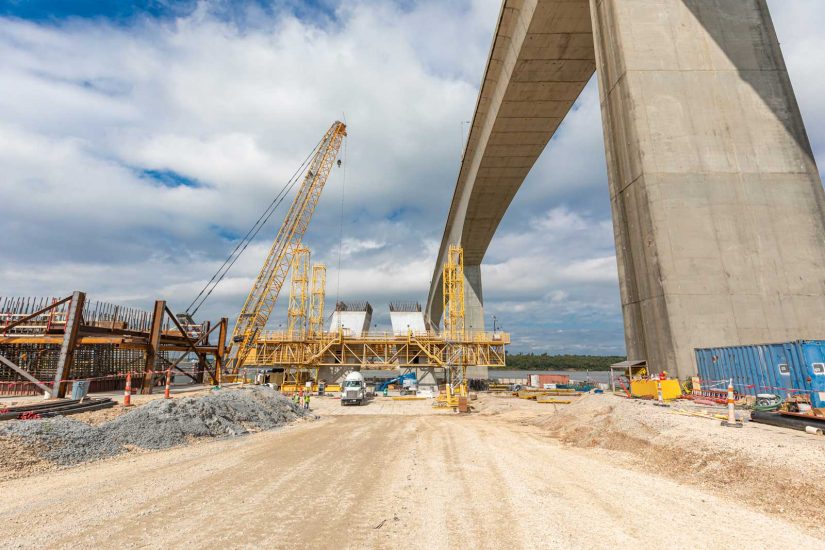 The project is the largest ever by the Harris County Toll Road Authority. The authority paused construction January 11 of the main pylons on the cable-stayed portion of the bridge for a consultant to review FIGG’s design. The consultant determined the curved portions of the pylons were not stiff enough to support the bridge deck. HCTRA is allowing FIGG to design a solution for consultant COWI North America to review.

In response to the pause on the ship channel bridge, FIGG released this statement:

“It is typical for two independent engineers to have some differences, and we are working collaboratively to satisfy both COWI’s and FIGG’s reviews of the Sam Houston Tollway Ship Channel Bridge Replacement Project. FIGG is pleased to work with HCTRA and their independent engineering consultants and contractor to provide a final project that is a point of function and pride within the community.”

The authority expects COWI to complete its review by March.

“When the engineer of record and the independent consultant reach concurrence on necessary design solution, work will resume on the pylons,” the authority said in a January 11 statement. “It is anticipated that this could take approximately three weeks.” 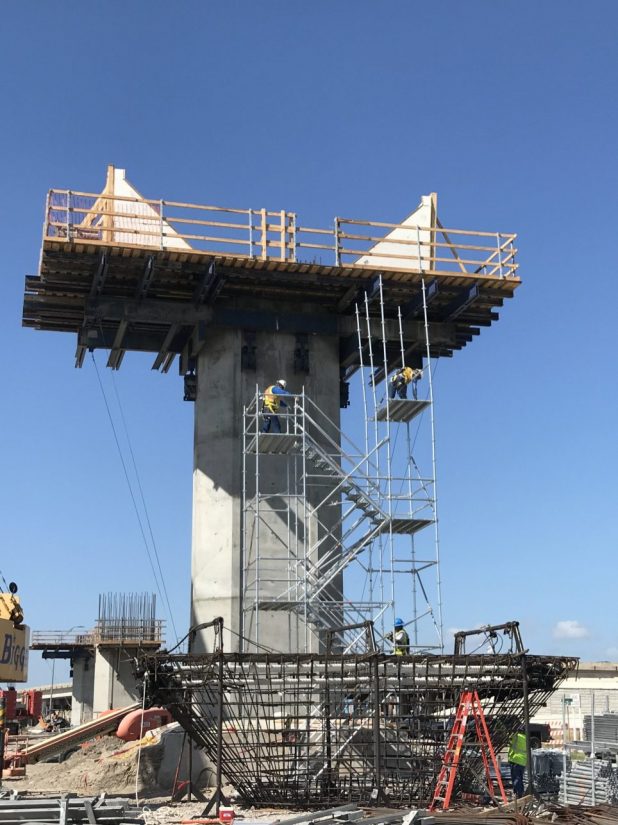 The Harbor Bridge, when completed, will be the tallest point in South Texas. Photo credit: TxDOT

The TxDOT’s decision to remove FIGG from any work on the main spans of the Harbor Bridge project in Corpus Christi will likely cause delays to its completion as the replacement design firm will need to review FIGG’s plans, the DOT said in a statement.

“The replacement design firm will be tasked with reviewing and recertifying the current design as well as recommending modifications, if necessary,” the statement says. “This development could result in delays to the project and, as more detail becomes available, TxDOT will share any effects this may have on the project timeline.”

Work on the other aspects of the project continues, including drainage, roadway and overpass construction and reconstruction of the interchange at I-37/U.S. 181/SH 286, the DOT says.

TxDOT adds that “all construction work completed to date on the project is safe and has been built in compliance with contract requirements and specifications.”

“As we have done since the inception of this project, TxDOT will continue oversight of all design work, including work performed by the replacement design firm in the future,” said Bill Hale, TxDOT chief engineer. “TxDOT is committed to taking the time necessary to carefully ensure and verify that the highest safety standards are met, as we do with all projects.”