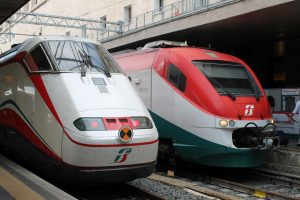 A new fleet of 40 electric trains for the railway network serving Naples and the province of Naples, the Circumvesuviana, to help significantly relieve traffic congestion and considerably reduce pollution in the entire area.

That is the aim of the five-year investment plan of Ente Autonomo Volturno (EAV), the Campania Region’s railway management authority, supported by the European Investment Bank via a EUR 68m loan. The EIB loan is guaranteed by the European Fund for Strategic Investments (EFSI), one of the pillars of the Investment Plan for Europe, also known as the Juncker Plan.

EAV’s total investment of around EUR 220m will be used to replace 40 trains that have reached the end of their useful life. The new trains will be deployed on the six lines of the Circumvesuviana, which serve one of the most densely populated areas in Europe: 47 municipalities with around 2.5 million inhabitants. The busiest line is the Naples-Sorrento line which, besides being a commuter line, also serves a large number of tourist destinations and cultural heritage sites such as Herculaneum and Pompeii.

For EAV, a company wholly owned by the Campania Region, investing in new mobility programmes aimed at protecting the environment is a priority to preserve the fragile and already congested transport network in the metropolitan area of Naples which, besides the huge numbers of commuters it carries, is impacted by the increase in traffic caused by the growing influx of tourists. The project will enable the EAV fleet to fulfil the latest requirements in terms of safety, operational and energy efficiency.

As regards the aims of the EU bank, the operation will serve to significantly cut CO² emissions and enable the EIB to subsequently step up its own commitment to meeting climate action targets. In terms of employment, during the construction phase 1 347 jobs will be generated while 46 new permanent jobs will be created in the management phase.

EIB Vice-President Dario Scannapieco stated: “In the metropolitan area of Naples, the Circumvesuviana railway lines are strategically important for commuters and tourists. I am proud therefore that the EIB is supporting this project in view of its social impact and because the move to new electric trains will have a considerable impact on reducing pollution, thus helping to meet the ambitious but achievable goals set by the European Union and the EIB.”

“This EUR 68m loan for the purchase of 40 new trains for the Circumvesuviana network will help meet the daily needs of the people of Naples and promote the cultural life and economic development of the Naples region. The European Union supports its regions and through the Juncker Plan continues to deliver tangible benefits for its citizens. We are now working to step up and expand these kinds of operations, which skilfully marry our development goals with climate action”, said European Commissioner for Economy Paolo Gentiloni.

President of the Campania Region Vincenzo De Luca remarked: “The revival of EAV continues. We are proud that, following its historic financial recovery, our company is the first public transport company in southern Italy to sign an agreement with the EIB under the Juncker Plan. Thanks to regional funds EAV has already started acquiring more rolling stock, and this loan will give it the impetus to continue doing so in order to provide our fellow citizens with an even better, more modern service.”

Chairman of EAV Umberto De Gregorio said: “Over the past three years we have managed a ‘bad company’ within EAV, completing some 800 transactions and paying debts of around EUR 700m. Over the period 2016-18, we generated operating profits of EUR 90m (compared to losses of EUR 330m for the period 2012-15) and net equity increased from EUR 10m to EUR 152m. EAV is now a sound company that is investing and recruiting. This is the start of a new era. The loan granted by the EIB is evidence of that work.”