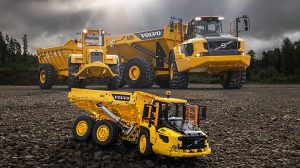 54 years after launching the articulated hauler concept Volvo CE continues to lead the field. Even the co-developed LEGO® Technic

Volvo Construction Equipment (Volvo CE) was the first to popularize the articulated hauler concept in 1966 with the birth of the 10-ton payload DR631 – fondly known as ‘Gravel Charlie’. Some 54 years later the company is still transporting earth, gravel and a host of other materials over rough, muddy, slippery, steep or otherwise impassable terrain. Volvo CE remains the market leader and continues to innovate with its H-Series range – which now includes its biggest ever production articulated hauler – the 60-ton capacity A60H.

In a classic case of art reflecting reality, the LEGO® Technic

6X6 articulated hauler Volvo A60H model is also an impressive work of engineering. Inside its giant box are 2,193 pieces, including six large tyres and heavy-duty motors. And just like the real thing, it is a technological tour-de-force, featuring app-controlled operation and a fully automatic transmission – a first for the LEGO Technic brand.

The 55 tonne (60 ton) capacity A60H (the real one, that is) is designed for heavy hauling in severe off-road operations, including quarries, opencast mines and large earth-moving operations. And the engineers from both LEGO Technic and Volvo CE wanted the new model to reflect the quality, reliability and durability of the real thing. The model certainly is big – measuring 200mm (7in.) high, 200mm (7in.) wide and a vast 600mm (23in.) long. It is also packed with clever features, not least the complex internal gear system – which is fully automatic and motorized – just like the real thing.

The motors are well integrated and hidden under the hauler body and the cab – and the Bluetooth for the control hub is cleverly turned on by rotating the A60’s cab-top beacon. Much like all the electronic machine control systems on the real machine, the model’s Technic Control+ hub and the mobile phone application that goes with it control the model, allowing it to move forwards and backwards, steer side-to-side and elevate and lower the dumper’s hauler body. That’s not all, Control+ also extends the play value, by setting users a number of challenges that highlight features of the machine, such as moving uphill, going through the gears and tipping the load.

The model takes its influence from the ground-breaking features and latest innovations on the A60H. With matched drivetrain, automatic drive combinations, including 100% differential locks, all-terrain bogie, hydro-mechanical steering and active suspension, this machine is unbeatable. Fitted with an active hydraulic front suspension for higher hauling speeds in tough conditions, the A60H (the real one, again), optimizes operator comfort and stability during travel, allowing more material to be moved in a shorter time for unmatched productivity. 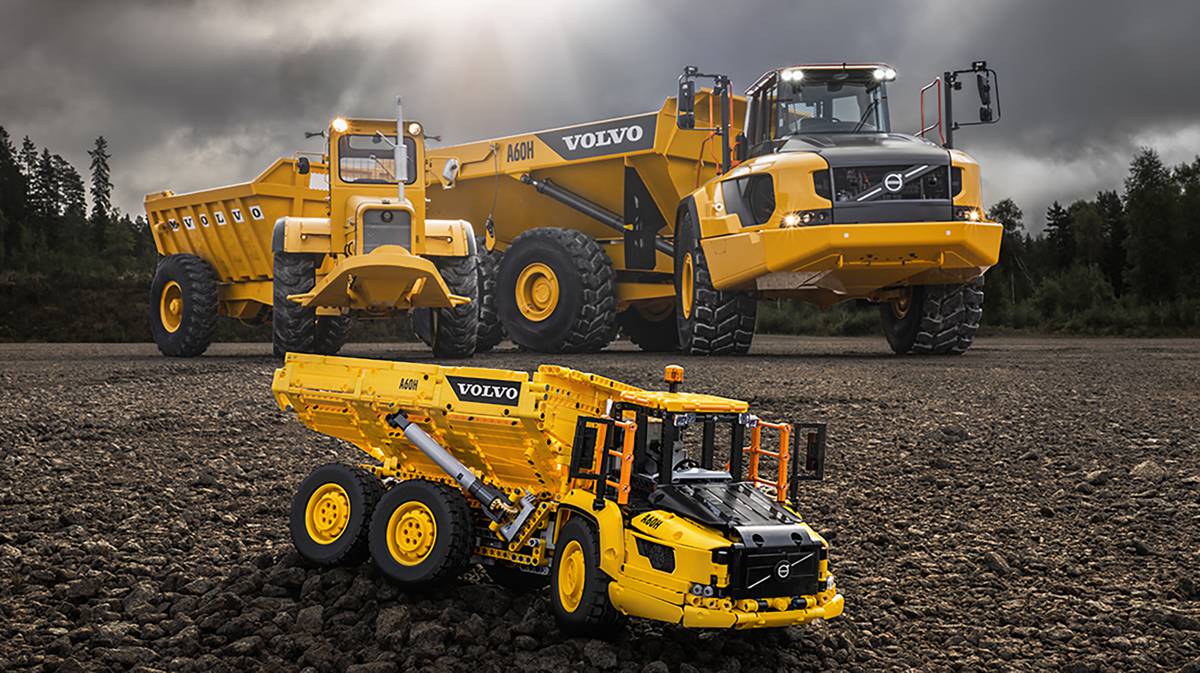 The fun goes on even after the build

“More than 50 years after we showed the world what an articulated hauler can do, we are still innovating and developing the concept.” says Volvo CE’s Mats Bredborg. “LEGO Technic and Volvo CE engineers have done an amazing job of replicating the A60H in miniature. It doesn’t just look like our A60H, it also follows its philosophy of innovative engineering and clever design. The Control+ mobile app and the automatic transmission are both incredible. Even the safety features – a key element of all Volvo machines – are all present and correct.”

“This is one of the more complex LEGO Technic sets of recent years,” says Niels Henrik Horsted, Marketing Director, Product & Marketing Development at the LEGO Group. “The clever design is a great challenge during the build process, and the new LEGO Technic Control+ app allows the machine’s functions to be remotely controlled – and the fun continues long after the build is complete, with the app challenges.”